I also offer standalone Radon Testing & Mitigation Services using Allay Radon, my proven process that’s guaranteed to reduce your home’s radon gas levels to below the EPA’s and your state’s action levels. This service is exclusive of my home inspection service and cannot be offered together. Let me put my 25 years of radon mitigation experience to work for you!

What is Radon and How Does it Affect You?

Learn the facts — radon may be contaminating your home!

Research about the connection between radon gas and lung cancer has gained more attention in recent years. But there’s good news: radon levels can be reduced significantly, and Mountain State Inspections LLC DBA: Radon Solutions of WV can help. 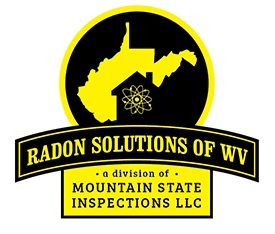 Radon is a naturally occurring radioactive gas that has become the leading cause of lung cancer — among non-smokers.

Most soils contain uranium that, over time, decays to produce radium and polonium. Eventually, polonium is released with the radon, which creates a high toxicity level in the air and water that it infuses. Perhaps some homeowners are thinking they could recognize high levels of radon in their home. Unfortunately, radon is completely undetectable with any human senses.

We cannot smell, taste, see, touch, or hear radon. Thus, it easily goes unnoticed. When this happens, everyone in the home becomes susceptible to contracting lung cancer. There are also very limited lung cancer symptoms. Even at that, they tend to lie dormant until becoming more severe.
Lung Cancer
Prevent Lung Cancer and Test for Radon

Radon testing can help limit your risk for lung cancer.

Lung cancer kills more people each year than the other top cancers combined. It also receives the least amount of funding, because many people believe it’s a self-induced disease. According to the World Health Organization, radon causes 15 percent of the world’s lung cancer cases and kills 20,000 people each year.

For those 20,000 people who have never smoked and have never been heavily surrounded by smokers, the lung cancer diagnosis is far from self-induced.

Radon induced lung cancer kills one person every 25 minutes, joining arsenic, asbestos and benzene as a Class-A Carcinogen.
Did You Know…

That radon gas was actually a vital aspect of the gaseous makeup of the atomic bomb? Although the levels of radon that resulted from the atomic bombs far exceed the amounts of radon found in a home, the principle remains the same — radon gas is very harmful and can be deadly!
Cigarette Smoke and Radon

Radon levels are measured in picocuries per liter, or pCi/L. A measurement of 1 pCi/L is equal to 2.5 cigarettes each day. If your home has a reading of 4 pCi/L, which is the Environmental Protection Agency’s required action level, every person is breathing in the equivalent of 10 cigarettes per day.
X-ray Radon

The amount of radiation in 4.0 pCi/L of radon is actually equivalent to the radiation in 100 chest X-rays. Sure that seems like a lot, but this gets worse. Most hospitals actually only allow patients to have four chest X-rays each year. Let’s do the math. That converts to the equivalent of .16 pCi/L per X-ray and .64 pCi/L of radiation a year with four X-rays. In other words, radon mitigation in West Virginia and Ohio is crucial to the overall health of any homeowner in this state.
Protect your home from radon today

Contact Mountain State Inspections LLC DBA: Radon Solutions of WV today to get a radon inspection and mitigation system in your home. There is no reason to wait any longer to address the risks of radon. We offer free estimates on all our radon services in Weirton, Morgantown, Wheeling, Moundsville, Steubenville , Saint Clairsville, Follansbee, Martins Ferry, Bellaire, Toronto and the nearby areas.

Saving Lives One Home at a Time. ®